The Most Amazing Two-and-a-half Minutes of My Life 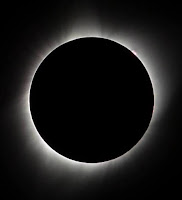 I've been back from my trip to view the total solar eclipse for days now and I'm just starting to feel like I've processed the experience enough to write about it. I waffled back and forth about going into the range of totality for weeks, then once I decided to go I was indecisive about where to go. Driving 200+ miles with hordes of other people to see something that would only last a couple minutes invites a constant question in the back of your mind: Will it be worth the trip?

Ultimately, I decided to increase the chance that the trip would be worthwhile by choosing a destination that had an unusual attraction; the old "killing two birds with one stone" approach. I set off with my friend Terry sometime around 3:30am on Monday for Alliance, Nebraska, best known for Carhenge, a replica of Stonehenge made of automobiles. (Only in America, right?)

As we got into Nebraska in the wee hours of the morning, we ran into quite a bit of fog. As the sky began to lighten we found ourselves passing through a mercurial landscape that moved from dense fog to patches of shifting mist wafting across the land like specters. When the sun rose over the Sandhills, the fog began to break apart in roiling, fast-moving clouds above us, revealing patches of blue sky and rays of sunlight over the green hills dotted with sunflowers. Now, I'm a sucker for misty, bucolic landscapes and, as a night-owl, I rarely see the breaking dawn, so that in itself was special. But this was something more than a beautiful morning on the high plains. This section of the drive was so magical, the natural elements so expressive and seemingly enchanted, I was already convinced the trip was worthwhile.

We stopped to top off the gas tank in Bridgeport and I got to chat with a couple fellow Coloradans while I waited in a fairly substantial line for the restroom. This gas station was the first place we started to notice more people and cars than would have been normal for the area, but calling it "traffic" would be a huge overstatement. We didn't get into any traffic at all, unless you count the last quarter mile as folks slowed down to pick their parking field around Carhenge. We saw several properties asking $50 for parking, but found that the field directly north of Carhenge (perhaps still part of their property) was $30 so we pulled in there.

We parked on the crest of the hill and had a very short walk to a prime viewing spot overlooking the pastures to the east. I could hardly believe our good fortune. Other than a missed turn that took us out of town a couple miles before we realized our mistake, we arrived without incident with plenty of time to spare, found a close place to park, and claimed a great location to set up Terry's tripod so he could film the eclipse. This sort of effortlessness would usually lead me to feel like the other shoe was going to drop, but I was in such a relaxed-yet-expectant mood that it didn't even occur to me to question it. Of course, I'd also been up all night and that might have re-calibrated my stress meter a bit.

A short cheer went up as the eclipse started, but that excitement faded pretty quickly as we waited for the real show to begin. I don't think the light changed significantly until it was at 75% or so. Everything was cast in a diffuse, golden light. It wasn't like darkness was falling, it was more like sunlight burning through coastal fog. We had been watching individual cumulus clouds march across the sky in a little herd for some time. Several passed across the sun, but they'd been moving fast. By the time it reached totality, the wind had picked up and the last few stragglers had moved on, leaving the sun unobstructed from our particular vantage point.

One of reasons I feel compelled to write of this experience is because of the surprising inability of cameras to capture what the human eye sees. Every video I've viewed, including the one Terry shot, doesn't even come close. They all show a white corona around a black moon and equally black sky. Some, like Terry's, show some glowing red spots (flares?). Still, they're nothing I'd describe as particularly awe-inspiring. The landscape looks very dark as well in most videos with the exception of this fantastic 360 degree film from NPR. But even it doesn't capture the eclipse itself accurately because if you're not zoomed in on it, it just looks like a full moon.

I wanted to experience totality because I wanted to see this wonder with the naked eye. Also, I might one day be writing about an eclipse in a future work of fiction and I wanted to truly understand first-hand what it was like so I could depict it correctly. I'm so glad I didn't assume that the event captured on film would be almost as good as being there.

That said, Terry's video did capture one true element that faithfully carried the essence of the experience. The sound.

People began to cheer and applaud right before the Bailey's Beads Effect and you can hear their shouts, screams, and exclamations shift from excitement to pure wonder as the corona suddenly burst out from around the moon. It's in that moment when everyone removes their glasses that the power of it hits you.

It was absolutely the most profoundly beautiful thing I've ever seen.

The sky glowed a gorgeous cobalt blue. The corona was a shimmering white and the moon itself was so black it looked like a portal had opened in the sky. At one point, the corona appeared to have three wings, one of which was smaller than the other two. Combined with the moon's circle, it looked like an upside down Star Trek insignia. The sun and moon usually seem fixed in the sky, but the glowing filament quality of the corona made the eclipse appear mobile, as if it were hovering.

I had binoculars on my lap, lens caps off, ready to use. I completely forgot they were there until it was over. I also forgot to pay particular attention to the stars that might have been visible. However, I did look around at the landscape and saw sunset in every direction (again, this NPR video captures that pretty accurately). I took a moment to absorb this unusual dusk and it's stunning beauty, searching for the best way to describe the way it felt. A line from the song I Dreamed of Rain came to mind: "...and peace spread over the land."

From the moment I first glimpsed the eclipse in its totality, I was overcome with emotion. My eyes teared up and the sensation that welled up in my chest felt like I might start sobbing at any moment. But it wasn't that tight feeling that usually accompanies great emotion. It was as if something within me was expanding out. I can't describe it in any other way than to say it felt like utter and complete joy.

I've heard people talk about looking on their child's face for the first time and feeling a profound sense of awe and wonder. It feels like you might just come apart, like you can't possibly hold all that love in, but somehow you expand to contain it. That's exactly what I felt in this moment.

I knew what I was looking at. I knew the science behind it. I didn't think the world was coming to an end. I expected to marvel at a fascinating celestial event and leave saying, "That was cool!" I didn't expect to feel so profoundly moved and changed by it. I can't even fathom what shifted. I didn't have some epiphany. I can't say I realized something that has changed the way I'll live my life. The trip itself was a great lesson for me, but that had little to do with the eclipse and was more about taking advantage of opportunities and pushing myself further out of my comfort zone to live life to the fullest. But something happened to me there and I'm not sure I'll ever truly understand it.

When totality ended, everyone cheered and applauded, only the excitement and giddy awe had been replaced with heartfelt gratitude. (You can hear all the audio nuances better on Terry's video than on the NPR film because we were at a distance from the center of the crowd where the most boisterous folks were.) There was a lot of laughter, too. I turned to Terry and we were both wiping tears from our faces and laughing about how strangely and unexpectedly emotional it was. We didn't talk about it in any detail immediately; it was just too overwhelming to discuss. My guess is that most people had to process it a bit before talking about it because there was so much to absorb.

We stay seated in our chairs until the entire eclipse ran its course. It almost seemed disrespectful to just pack up and leave while the moon still covered some section of the sun. When it was over, we strolled down the hill to explore the henge.

I had conversations with a handful of people before the eclipse and a few more afterwards. Everyone I encountered was friendly and in good spirits. I usually hate large gatherings of people because there's always bound to be someone acting like an obnoxious idiot in some manner or another. That was not the case here. Hell, even the porta-potties were nice (as far as those things go). And the first time I went down the hill to use them, I heard a group of guys playing Neil Diamond's Sweet Caroline on a boombox and singing along at the top of their lungs. That was far more surreal than the couple of folks dressed as aliens or the guy in the kangaroo mask wearing mechanics coveralls and spark plug bandoliers across his chest. (I mean, that sort of stuff is expected at a place like Carhenge, right?)

I think most folks had the same idea we did about avoiding traffic. Rather than head out immediately, we had a nice lunch at a Mexican restaurant in town and started home later in the afternoon. That put us in bumper-to-bumper traffic on a stretch of two-lane highway when we left town, but we weren't in any hurry and the countryside was a pretty distraction from the fact that we were crawling along for miles.

My only regret is that we didn't stop on the way back to take a picture of the sunset. The sun was huge, glowing a deep orange against a purplish sky, its vivid beauty probably due to smoke from the wildfires out west. I've seen that stunning sort of sunset many times before. It wasn't unusual. But it would have been nice to capture that particular one just as a reminder of the extraordinary day.

I imagine I'll still be processing this experience for some time. I may never totally understand the mystery of it and why it elicits so much indescribable joy. One thing I do know, though. I'm going to make a serious effort to catch the next one in 2024.